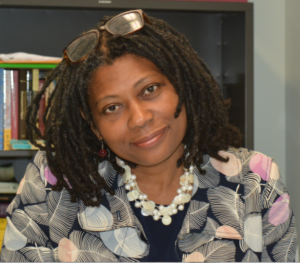 Monuments, Memorials and Ancestry: Material Culture under the aegis of Black Lives Matter

Who is fitting to be remembered and memorialized in the afterlife? In other words, who becomes a revered egun (ancestor)? Using Yoruba concepts of who becomes a revered ancestor, the paper explores the relationship between memory and memorializing, memory and representation, and the spectatorial gaze in the attempt to capture history.  It will explore different historical monuments like the statue of Zumbi in Rio, Harriet Tubman and Frederick Douglass in Harlem, the MOPANAH in Haiti – the site of the entombment of Henri Christophe and Jean Jacques Dessalines, and intersect with the discussion on confederate memorials in this new iteration of Black Lives Matter. The analysis will center on how neither image nor representation is neutral or value free, and the spectator of histories of trauma and agency are caught between the originating event and the possibility of capturing it, feeling it, identifying or dis-identifying with it. In effect, transforming the gaze into a bodily, sensorial epistemology that allows the viewers to engage with the past and its present effects.

Cheryl Sterling is an Associate Professor of English and Director of the Black Studies Program at The City College (CUNY).  Her award winning book, African Roots, Brazilian Rites: Cultural and National Identity (Palgrave MacMillan 2012), explores how Afro-Brazilians reconstruct the Yoruba matrix within Candomblé to create contemporary literary and performance culture.  In her current book project, she creates Aesthetic theory based on Yoruba orisha paradigms to read African and African Diasporic texts and images.