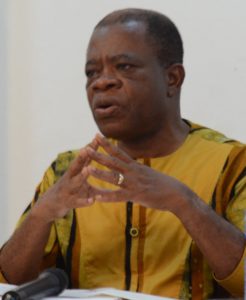 Liminality, Copresence, and Pneumareisis: Pathways to Knowing Ancestors in Anlo-Ewe

This presentation focuses on the significant place of  ancestral traditions in understanding the critical space of the sacred-secular continuum in everyday and extraordinary contexts of the lived experience among the Anlo-Ewe. While common notions often associated with the liminal and immanence may allude to this continuum, I innovate and employ the term pneumareisis, which seems to most appropriately capture the meshed—not dual—constitution of the body (physical), mind (consciousness) and extracorporeal   states that enable and transcend body-mind-soul existentialities. Drawing on specific examples of practices and their philosophical-phenomenological foundations, this paper clarifies and locates the Anlo-Ewe ancestor (and ancestral traditions) in this mesh.  The notion of  pneumareisis provides a more plausible orientation and extended contexts in which liminality, immance. and copresence are refreshed continually to enrich the everyday unified world of ancestors, including the essential kodzogbe. The exploration of this mesh the kinds of attitude, mental, and psychic states that are indispensable in inhabiting and thus projecting more accurately the seen and scene-centered (megbe/nukpɔkpɔ) worlds inhabited and shared discursively by my ancestors.  Several corporeal, mental, gestural, and ritual-ceremonial traditions which illuminate the shared world of ancestors among the Anlo-Ewe are considered, including those from my immediate, personal environments.

Professor Daniel Kodzo Avorgbedor (PhD, IU–Bloomington, 1986) is currently on a post-retirement teaching and research contract at the Institute of African Studies and in the School of Performing Arts, University of Ghana, Legon. Major research and teaching areas include performance theories, African Diaspora studies, cross-cultural aesthetics, and urban ethnomusicology with research focus on rural-urban dynamics in reconstructing Ewe sociocultural and musical identities.  Professor  Avorgbedor served as coordinator of the Ethnomusicology program at The Ohio State University, Columbus and held a joint appointment in the Department of African American and African Studies, 1995-2010. Major grants received include Wenner-Gren, H.F. Guggenheim, and NEH (team) awards.  In addition to frequent international speaking engagements, Dr. Avorgbedor has published essays in several journals and entries in encyclopedias such as Oxford Dictionary of Music and Oxford Bibliographies Online, Sage Encyclopedia of  Ethnomusicology (in press), Garland Encyclopedia of World Music, (vol. 5, 1998) Encyclopedia of Shamanism,(vol. 1, 2004), and African Folklore: An Encyclopedia. (2004).  He edited The Interrelatedness of Music, Religion, and Ritual in African Performance Practice (2003), and served as guest-editor of the special issue of World of Music on Cross-Cultural Aesthetics (2003). He was visiting scholar at Humboldt University, Berlin (2009) and at Gutenberg University, Mainz (2012) and a contributor to EVIA Digital Archive Project (http:/eviada.org).